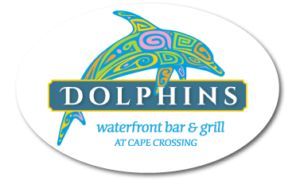 History of the Dolphins/Cape Crossing Location 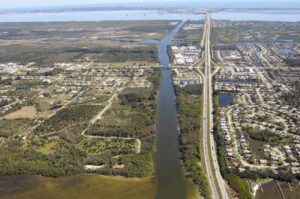 Cape Canaveral has been featured on historic maps for more than 400 years. Given the Cape’s geographic advantages, it has always been a popular site to construct a safe harbor. In 1852, the process began when President Zachary Taylor appropriated $100,000 for a Canaveral Harbor project to provide a harbor of refuge. Records show that time is also when the idea of dredging a canal across Merritt Island began. However, the Merritt Island canal was not included in the plans when the State Legislature requested that the Federal Government appropriate $200,000 for the harbor’s construction in 1889.

It wasn’t until 1937 that Congress authorized the go-ahead through the River and Harbor Act. In 1941, the harbor project was thoroughly surveyed again and a 12-foot deep barge canal across Merritt Island was promoted as a “short route” to the Indian River. While Federal bureaucrats and the Army Corps of Engineers argued about the need for the expensive port project, Japan attacked Pearl Harbor, thrusting the United States into World War II and halting the project.

After the war, the project resurfaced as a $1.6 million harbor proposal that included a barge canal designed to cut through Merritt Island linking the Indian River with the Banana River and proposed harbor for an important direct water connection with Central Florida’s citrus industry. In 1947, taxpayers of the harbor district approved a bond issue, assuring $830,500 to match a government appropriation for starting work. Plans for the Merritt Island Barge Canal were then finalized for Central Florida’s economical waterway to the Atlantic Ocean. 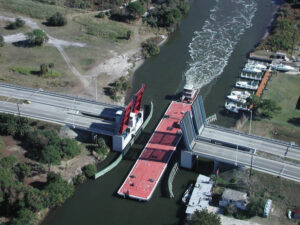 In May 1950, a hopper dredge by the name of Ventnor arrived in the Indian River, ready to slice Merritt Island in half. The dredging of the canal generated a great deal of interest with the public. in In December of 1950, Ventnor broke through into the Banana River to complete the first phase of the Canaveral Harbor project. A new dredge took over to cut through Cape Canaveral to the Atlantic Ocean in June 1951. Port Canaveral was dedicated in November 1953. Today, in addition to the 4.6 million cruise passengers that the area serves each year, the Port also handles more than 3 million tons of bulk freight cargo.

The Cape Canaveral Barge Canal, with its shores lined with anhinga, herons, ospreys and manatees, was now open to provide invaluable access between the Intracoastal Waterway and Port Canaveral. Citrus transport, oil barges and later gantry and rocket parts now had passage to the benefit of all of Central Florida. Today, the canal is lined with marinas, dry-dock boat storage, high-end condos, private residences, wooded land and even a cemetery. It’s a water highway for fishing, kayakers, boaters and yes, barges. 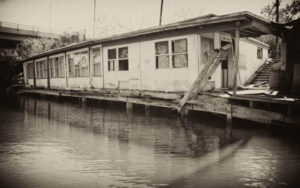 The Barge Canal attracted many fishermen. In 1958, a waterfront fishing camp was started by Dave and Ann Tingley just west of the Christa McAuliffe Bridge. For the next 50 years, this beloved local landmark called Tingley’s Fish Camp would create memories for generations of Merritt Islanders.

Dave Tingley was an avid fisherman and personally ran the popular fish camp, restaurant and store. The Tingley RV Park and Marina was added. The restaurant was known for having the best hamburger in town and their Friday Night Fish Fry became a local staple.

When Dave died in 1978, Tingley’s Fish Camp and Tingley RV Park and Marina continued for twenty more years before being sold for development as a world-class resort and marina, 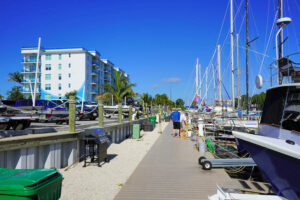 Today, the location is home to Cape Crossing Resort and Marina. In 2022, the resort opened Dolphins Waterfront Bar & Grill on the shores of what we now call the Cape Crossing Canal. Dolphins is the largest Tiki Bar on Florida’s Space Coast. Along with Cape Crossing Resort & Marina, Dolphins is dedicated to creating wonderful memories for new generations of locals and visitors alike. Dolphins Waterfront Bar & Grill will carry on that tradition started decades ago by Dave and Ann Tingley of serving delicious food in an old Florida setting.